April’s review is on Good Ol’ Freda, a 2013 documentary about Freda Kelly, who worked for the Beatles. I learned about the film last fall from strangers at the train station during a conversation about the decade of the sixties. They said that if my husband and I liked Beatles music, we would like the film. And they were right. 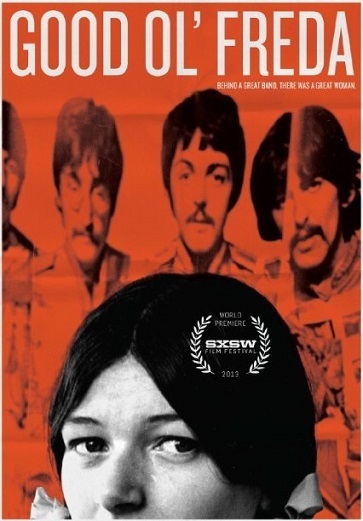 Good Ol’ Freda gives an insider’s look at the Beatles during their rise to fame and until they broke up. I had no idea they were so generous, cooperative, and responsive to their fans. Where does Freda come in? Good ol’ Freda was their secretary, their go-to person, their encourager. I wouldn’t be surprised if she kept them in her prayers.

An Uncommon Person
What makes Freda stand out from others who’ve worked with celebrities is her loyalty. While she claimed to have been in love with each of the Beatles at one time or another, she kept her mouth shut about their personal lives, refusing to share the secrets she knew. A tireless worker, she was the one who nudged them to be considerate of their fans because, as she said, “I am one.” On top of that, she refused to make money from her close association with the Beatles. No tell-all book deals! After the Beatles broke up, she could have retired just on the sale of memorabilia in her attic. But did she? No, she gave it away and still works for a living.

Who Would Like Good Ol’ Freda
Although this film doesn’t showcase Beatles music, I think anyone who’s fascinated with the Beatles as young men OR with uncommon people would enjoy it. Freda continues to live a quiet, unassuming life. At the debut of the documentary, she seemed surprised by the warm reception and attention showered upon her. It’s not often you come across someone as humble. May God bless Freda Kelly.